Mary Pickford: The Justin Bieber of Her Day?

After quoting Mary Pickford last week, I had a couple of people ask about her. Of course I didn't know anything, but that is easily rectified in the computer age. So today I present Mary Pickford, a.k.a. Gladys Smith (1892-1979): 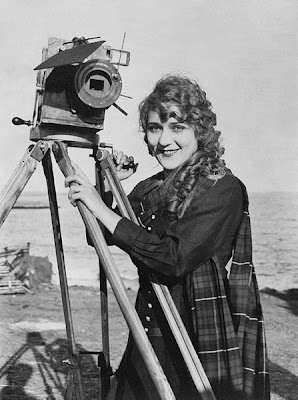 This media file is in the public domain in the United States. This applies to U.S. works where the copyright has expired, often because its first publication occurred prior to January 1, 1923. See this page for further explanation.

It turns out that Mary Pickford was a giant in the film industry. Not only was her fame as a silent actress akin to that of Charlie Chaplin (i.e. THE biggest starlet of her day, and considered at the time to be the most famous woman to have ever lived), but she also helped reshape Hollywood. She is the reason that movies are not simply reproductions of plays on film.

On a funny note, one might also call her the Justin Bieber of her day because she was originally identified by her hair. When she first gained popularity, they didn't put actors' names in the credits, so she was simply known as "The Girl with the Golden Curls" or "Blondilocks." And when she finally did cut it in 1928, it was front page news. Sound familiar?

Anyway, I don't want to bore you with too many details, but I will mention two facts that make me like her (and make me think of writing):
Unfortunately, the advent of "talkies" became her undoing. Though a pioneer of the film industry, she, ironically, underestimated the power that sound combined with film would have (that, and she cut her hair). In the end, she retired as an actress in 1933.

So I ask you . . . what would you do if your chosen career suddenly ended for whatever reason? And are e-books today the equivalent of "talkies" back then?
Posted by Janet Johnson at 6:40 AM

LOL Those going the non-traditional publishing route will jump on this post. This supports their beliefs.

You've got to admit she does have great hair.

Hi Janet .. yes - Mary Pickford was an outstanding pioneer of film - really interesting to read about her.

Fascinating!!!! It is amazing how small things can matter! sad that cutting her hair was such a big deal. Now these days, you find said hair on ebay!!!!

So Felicity and Jennifer Anniston can stop complaining now about everyone just focusing on their hairstyles... :D You didn't mention that she was also one of the founders of United Artists. (I stumbled upon her doing my little research for my post "Restless Anchovies" last spring.) UA was film's version of self-publishing and it was founded by her, Chaplin, and a few other actors--it's now headed by none other than Tom Cruise. Interesting, yes?

What would I do if my career disappeared? I don't know. Find something else, I guess. Clean houses, maybe? ;p <3

I has been interesting to read about Mary Pickford. Also I think "E.Readers are the reason a lot of book stores are closing. I love the nook, but I like holding a complete book. However the nook is a great idea for an alterntive to huge book bags with heavy books that used to break our backs. That is if school districts are estute enough.

The bridge is in China "Qingdao China and is 26.4 miles long. I have been having problem remembering things and I forgot to put that in my post.

Look at you go, research girl! Thanks for all this info on Mary Pickford. So fascinating! (Her hair doesn't even look that blond, though!)

You're right, we shouldn't underestimate technology. It is the future ... though I hope real books never go away! Silent films were a little different because their hay-day was short. Books have been around for hundreds of years, so *hopefully* they won't be replaced completely. But with that said, I'm starting to wish I had an e-reader. Especially when I went to Hong Kong, all that extra weight in my suitcase ticked me off!

Fellow writer popping in to say hi! I never thought about e-books as talkies. How interesting!

And my career did end because of the old media/ new media switch!

hi miss janet! i like learning bout old stuff. shes a neat lady. im hoping books dont get all replaced out by ereaders. bout that career stuff for now im just getting started so im not worrying bout it ending. :)
...hugs from lenny

Interesting post. I'd heard of her, but didn't know much about her life. Thanks for sharing about her.

Oh, she sounds wonderful! Her name was vaguely familiar to me, but I couldn't place her at all. Not sure how I feel about the fact that a woman who was considered the most famous woman ever to have lived is now almost entirely forgotten. Hmmm. I guess fame really is fleeting.

Wow-- had no idea (very interesting)--you got to admit her hair is cool!

I must admit, her hair was the first thing I noticed! Love the work ethic, though -- and the fact that haircuts have been sinking artistic endeavours for a lot longer than I thought!

Very interesting! I love that Mary Pickford used her fame to benefit charitable causes. And honestly, I don't know what I'd do if my career suddenly ended, but I'd be really sad.

I do not think ebooks are the equivalent of talkies because there's something wonderful about having pages between your fingers.

Then again, maybe that's just me.

Janet - wonderful research for a great post. Thanks for sharing - Maeve

How intriguing! I had no idea about any of this. The Justin Bieber comparison was hilarious!