I don't know what it is about April, but every year it is as though the winds of life pick up a bit, and the swirl and clutter of it all is just a bit more than I can handle. Something has to give. And usually it is the blog.

Now please, no worrying about me. I am fine. I am busy living life. And it is good. Just a lot.

So I am taking my annual April blogging break, and I hope to meet back up with ya'll in May (or so).

In the mean time, I'm sending best wishes to all of you in whatever endeavor you are up to. 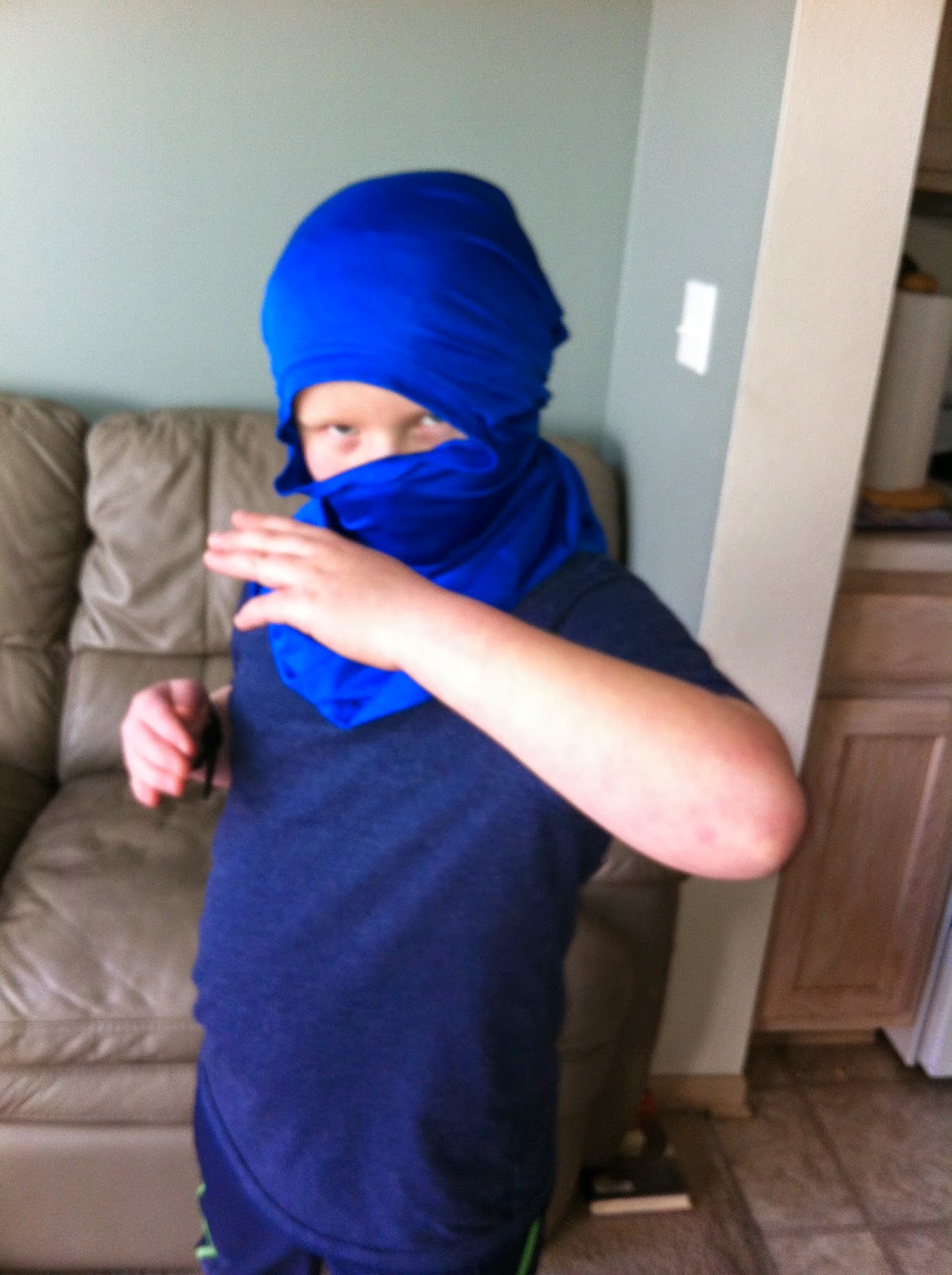 (This is my ninja son helping me go into stealth mode).
Posted by Janet Johnson at 6:00 AM 3 comments

"Everyone wants to be successful until they see what it actually takes."


I saw this quote on facebook this week. I don't know who said it, but it was accompanied with a picture of a ballerina's bleeding and bandaged feet. Success looked pretty painful.

And I bet you saw the picture of the physician after losing a 19-year-old patient that went viral last week. A moment of "failure" . . . probably after doing everything he was humanly capable of doing.

As I consider these two images, thoughts are swirling in my brain. Success is such an interesting concept. One word, but defined so differently from person to person. Are we only a success when we've reached the point of being a "prima ballerina"?

I once ran a half marathon. It was hard. It left my feet a mess, and gave me aches I still deal with. Am I a failure since I now choose to run shorter distances? I don't see it that way. I see it as a success that I still run.

A person who writes a book, but never gets an agent or sells it . . . are they a failure? I don't see it that way. I think they are a success for finishing the book.

Now don't get me wrong. I believe very strongly in working hard to achieve something. And I don't think we should hand out awards just for showing up (I really hate the trophies they give to everyone for just playing rec soccer or whatever). But as we celebrate the small successes, they can keep us moving forward when everything else would tell us to stop. Give up.

Work hard. Do your best. Don't give in. And when you reach a milestone, celebrate! Don't be afraid to recognize the quiet successes that litter our lives.

What is your most recent quiet success? I'd love to celebrate with you!
Posted by Janet Johnson at 11:34 AM 5 comments

A Talent I Don't Have

Words. I love them.

Simple words with fun sounds. And oh don't get me started on cognates and lexical gaps and all the fun things that amuse me because I'm a language geek. I LOVE WORDS! Let me shout it out from the rooftops!

So you'd think, given all that, that I'd be a fabulous cross-worder. You'd think.

Every now and then I dive into the foray of a puzzle because I'm certain this time will be different. Except it never is. <sigh> And I'm scratching out letters, and sneaking cheating peeks at the answers until I bang the magazine shut. Because who thought that was a good clue anyway?!? No one could have guessed that!

And so I move on in frustration, swearing them off forever. Or at least until the next time . . . When the glorious blank spaces call out to me and the need to find a pen (always a pen!) overcomes.

And all this makes me think. Have you ever let a character struggle with something that by all rights should have come easy?

The Rest of the Story

Friday night we had a family night. Dinner at the "Train" place (where you order on a phone and then a little train delivers your food) and then Disney on Ice.

It was awesome. My husband and I have been gone a lot lately, so the kids were excited to be spending time with us. The train delivery of our food was just cool. We smiled. We laughed. We even let the kids get light up toys for the performance. We were just happy to be together. And even my 11-year-old was loving the ice skating.

At intermission I posted a happy picture on facebook of our super fun evening, and if that was all you ever heard, you'd have an idyllic picture of our family evening. Maybe you'd be a little jealous and wish you could do the same. Maybe you'd roll your eyes and doubt it was that great anyway. Whatever your reaction, my "story" is out there exactly the way I told it.

See, the first half of our night really was that idyllic. I just never got around to posting about the second part.

Just after intermission, 8-year-old began complaining that his stomach hurt. He really wanted to wait it out because we were having that much fun. But shortly before the end it was too much. Husband took him out, and shortly thereafter the rest of us followed and met them at the car where 8-yo was holding an empty grocery bag and moaning.

We hurriedly got on the road (thankfully we beat most people out of the lot), but it wasn't long before the puking began. The other kids immediately complained of the smell, and though it was a chilly night, but we unrolled the windows and did our best to ignore the shivering. Well, that worked right up until the skunk smell hit. I couldn't decide what was worse.

At home we began the process of cleaning up the child, doing laundry, scouring the car seat, finding a suitable place for him to sleep (with low clean-up factor and easy access to a toilet). Oh, let me tell you that it was the polar opposite of the first half of our night. Not fun.

Not fun at all.

Except I was cracking up the whole time. Because polar opposite! Hahaha! Okay, well, I think the irony is funny.

Point is, the rest of story completely changes everything. Yes, we had fun, but it wasn't the idyllic evening that was potrayed in that facebook post (even if that WAS an honest posting at the time). And this is like the writing world (and any other world, but since this is a writing blog . . .).

. . . and maybe we think that's really cool, but maybe we compare ourselves just a little. And maybe a little jealousy creeps in. And we wonder why we don't have what they have. Why haven't I found an agent yet? Why didn't my book sell that fast? Why don't I have crowds and crowds of people at my book signings?

Not that I have ever felt this way. ;)

Here's the thing: We may know all the good stuff, but what we don't know is the rest of the story.

Because I guarantee you that everyone has their struggles. Surrounding those idyllic moments are doubts, and concerns, and HARD THINGS. Things we really, really, really wouldn't want to go through.

And I sometimes need this reminder. We are all different. We have different successes and different trials. And that's okay. We take the bad with the good, and we are grateful for what we have.

So let's stop comparing ourselves. Stop thinking we aren't good enough because we don't have what they have. Let's remember The Rest of the Story.

And then let's laugh a little. Because that's so much better than the alternative.
Posted by Janet Johnson at 11:04 AM 8 comments