So I just spent the last hour serving Cranberry Sauce (though it looks more like Cranberry Jelly) in the cafeteria of London's elementary school for their Thanksgiving dinner. I found it very interesting to see who took it and who didn't. Here's what I noted:

- Cranberry Sauce is an extreme dish, meaning that people either love it or hate it.

- Like or dislike had no apparent tie to ethnicity or culture (and there's a broad range in London's school).

- The universal sign for dislike is wrinkling up your nose.

Then suddenly I was curious about the whole cranberry phenomenon. Why do we always serve this dish at Thanksgiving dinner when only 1 in 10 people eat it anyway?

And having just asked, "Would you like Cranberry Sauce?" a hundred times or so in the cafeteria, I feel like I've already conducted a poll, so I thought, "Why not? I'll put a poll on my blog!"

So here's the question:

Cranberry Sauce: yes or no?

And as a follow-up:

Does your family include it as part of Thanksgiving?

Please weigh in on the issue (see sidebar poll). This is important stuff!

And just as a little tidbit about cranberries, did you know that cranberries are native to northeast North America? They grow from the mountains of Georgia to the Canadian Maritimes. And in 1620, the Pilgrims learned to use them from the Native Americans who used them as food, dyes, and medicines.

Now you're smarter for having visited my blog. :)
Posted by Janet Johnson at 12:39 PM 6 comments 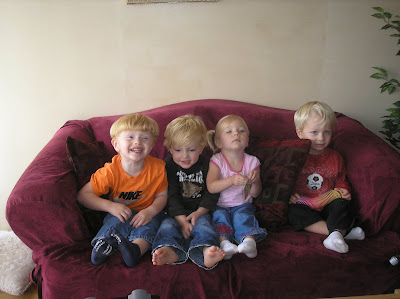 Today, Brandt had his very first official invite-friends-to-it birthday party. I tried to pull a desired theme for his party from him, but all he would give me was "Chocolate Cake," so I made that the theme (although, I didn't stick to it too tightly).

Yesterday, I took Brandt shopping for gift bag goodies, plates, ice-cream, craft items, etc. He knew just what he wanted. No slipping in mom-preferred items with him. Before bed, we sorted foam Noah-the-ark (this is what I mean about not sticking to the theme) stickers together (the activity), and assembled the gift bags. He followed instructions very well, and was so proud.

Only three of the six invited guests were able to make it, but Brandt didn't care. He was so excited and had a great time with his friends. We let the kids play for a while, then attempted to do games.

First, we played "Put the Chocolate in the Mouth" (aka "Pin the Tail on the Donkey"). 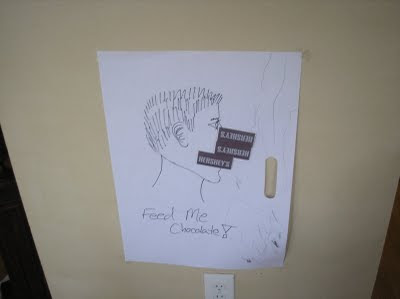 Not a huge success. They hated the blindfold, and other than Brandt (who TOTALLY cheated by peaking), refused to play. The moms played, though. (And as you can see, Brandt went back later and made sure the boy got ALL the chocolate. He was concerned)

Then we tried "Vanilla, Vanilla, Chocolate" (aka "Duck, Duck, Goose"). 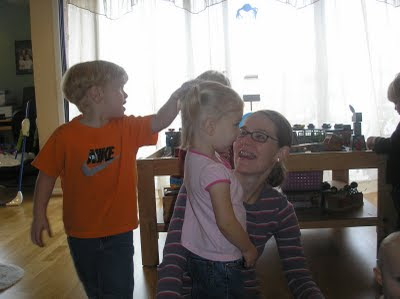 Another failure. Two friends refused to play. Brandt insisted on being "it" every time, and his last friend insisted on chasing him every time (which I suppose worked out well).

Our last ditch effort was hitting the balloon over the streamer. That finally got some love. Even the baby loved that game.

Next we did the craft, and all the kids enjoyed sticking the foam stickers on the big foam sheets. I also pulled out the bath crayons (that I hid years ago after struggling to clean the lousy "easy-to-clean," "just-rinse-it-off" mess). They worked extremely well on the foam, and the kids loved it. In fact, Brandt told us he wasn't ready for cake because he was still coloring. . . . Never mind that he's been talking of this chocolate cake for over a week. Never mind it's the theme of the whole party. He's still coloring. 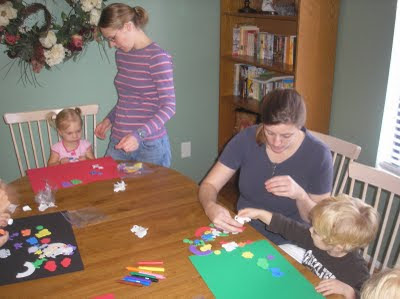 However, when we asked "Who's ready for cake?" all the kids came running. We sang "Happy Birthday," Brandt blew out the candles (for the second time), and we ate. And then, Brandt was so busy eating, he didn't have time for his presents. Funny boy. 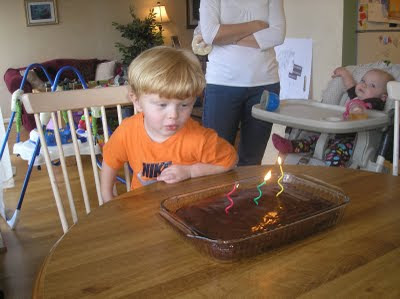 But all his friends were so proud of what they brought, and Brandt was so tickled with everything. He gave nice, sincere thank you's to everyone. 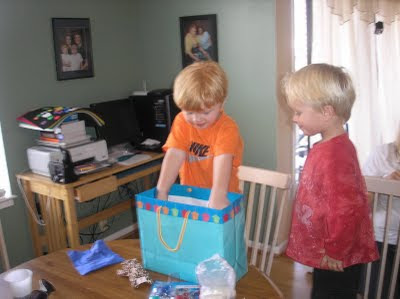 This is Brandt struggling to unwrap the newspaper present. Daddy couldn't fnd the cute wrapping paper I bought (and in all fairness, neither could I). 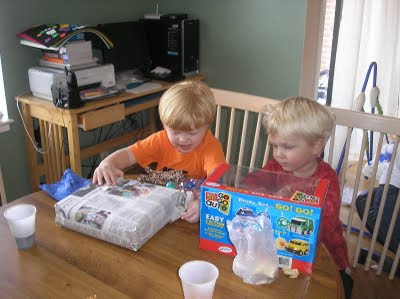 Finally, Brandt passed out his specially designed gift bags (they're supposed to look like chocolate bars), and was the first one to pull out his slinky. His only problem was deciding what to play with next. He spent the rest of the day rotating toys. And might I add, London was quite excited about Brandt's gifts, too. 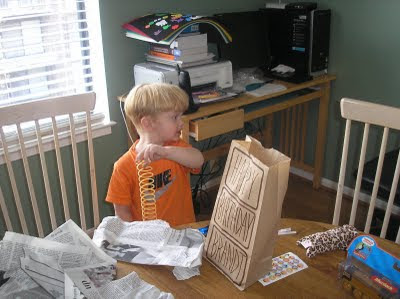 The party was very simple, but it was a hit. Brandt had fun, and we didn't kill ourselves over-planning. Two important features.

Okay, the countdown is on:

1 workday left for Rick before vacation.

4 days until Rick, Brandt, and Khyah leave for Utah. Is it bad that I'm so excited?

6 days until London and I take off.

7 days until I get my hair cut. Hallelujah!

13 days until Thanksgiving II. My pant button feels tight just thinking about it.

14 days until we come home.

15 days until our 8th Anniversary. And he still puts up with me!

17 days until Rick goes back to work. Aaaw, man!

50 days until I start my New Year's resolution to lose weight.

51 days until I abandon my resolution. Okay, neither of these are true. I fully intend to start dieting tomorrow. (I tell myself that every day!) :D

132 days until my birthday. I can wait for that, though.

940 days until Rick finishes his residency. But who's counting?

London was out of school on Tuesday so we took a little drive downtown. Though I had gotten directions from a friend, and they seemed fairly easy, I was getting nervous about the parking aspect because it was 10:15 before we made it across the Potomac, and I had forgotten the GPS (which, for all of you west-coasters, can cause major anxiety out here for even the most directionally-inclined). Luckily, we got the last spot on the street (I kid you not), and I can tell you I breathed much easier after my flawless parallel parking job. That's when the sheer joy of wandering the nation's capitol with my kids kicked in. 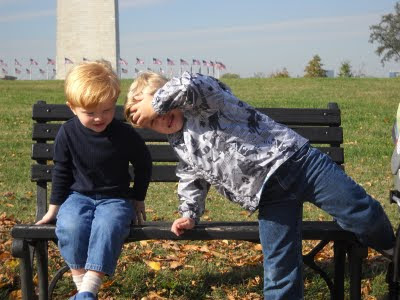 Our parking spot was right in front of the Washington monument, the Lincoln monument was taunting us from the next block over, and the American History Museum (Smithsonian) was calling to us from across the street. And at that point, I didn't even realize that the White House was a mere block-and-a-half away. Though it may not be my strongest subject, I am a history geek when it comes to our amazing country. In college I even flirted with the idea of majoring in it. The reason I didn't is because there aren't a lot of job prospects with such a degree. So I majored in English. Don't quote me on my logic.
But I digress.

So after London and Brandt debated the finer points of where to go first ("This way!" "No!" "Yes!" "No!" "Yes!" "No!" "Yes!" "No!" "Yes!" "No!" Etc.), I opted to go to the Natural History Museum. On the way, we saw an advertisement for Night at the Museum: the Smithsonian, and to save time I'll just say London tested all my history knowledge by asking about Napoleon, the Revolutionary War, the War of 1812, Betsy Ross, and well you get the picture. I must have passed the test because London finally said, "Wow, Mom, you even know more than me!"

In the museum, we went straight for the elevator, and after fighting a valiant fight to get to the 3rd floor, we finally settled for the 2nd. Turns out the 3rd is for employees only. Oops. But the 2nd floor was very cool. 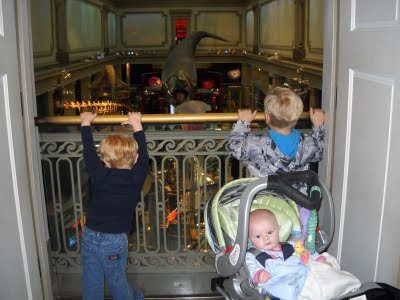 There was an Egyptian mummy ("Mom, is the person still in there?"), Roman pottery, a Forensics section with buried bones and reconstructed skeletons. London wanted to know who each and every skeleton was (which of course was the point of the exhibit, that sometimes we can only guess using the clues that the bones leave behind). There was also an animal exhibit showing the bones of various animals. The Whale was pretty impressive (though London really liked the swordfish). 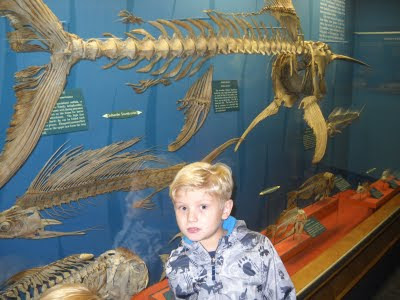 After talking about the two kinds of snake skeletons (poisonous vs. non-poisonous), Brandt turned to the next kid who had just come up with his mom and told him all about it. 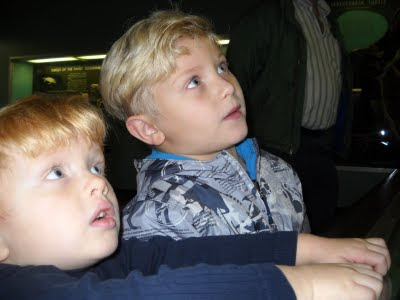 The boys really enjoyed it. And I shouldn't be so surprised about that.
We planned to go to the Aeronautical Museum next, but got sidetracked by "The Carousel on the Mall." I gave London and Brandt the option: "We can get something to eat here, or we can ride the Carousel. But we can't do both." I'm sure it's not hard to guess what they chose. 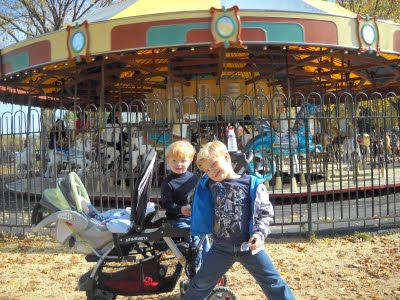 Even Khyah seemed to enjoy the ride. I suppose you have to splurge every now and again. 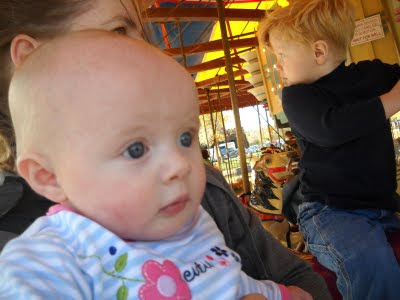 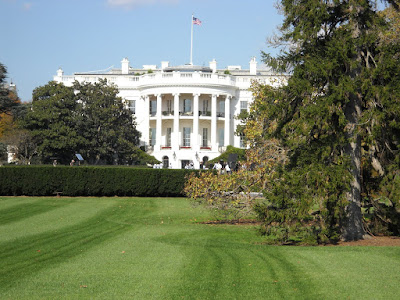 When we got there, a bunch of people were playing football on the grass right next to the building (which is far enough away that we couldn't make out faces). There were cameras and a couple of men in suits with the footballers. And based on "The Picture of the Day" for Nov. 3rd on the White House website, I feel fairly confident (not certain), that we saw Mr. President from a distance. London asked me: "Mom, will they be in trouble for playing there?" I told him they most likely had permission. London wanted to get permission, too. I told him I'd look into it for next time. Turns out you have to get permission from your state legislator. I'll have to work on that. (So if any of you plan to visit [hint, hint, hint], and want to go there, plan ahead! It takes at least 30 days to get permission). 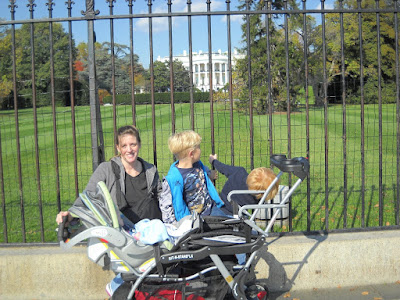 The drive home was smooth except that Khyah cried the entire time (seriously). She had been perfect all morning, so I guess this was payback. ;) But it was a fun little day trip. Definitely on our docket for future daytrips. Though we're far from family, DC is a great place to be.
Posted by Janet Johnson at 11:22 AM 5 comments