Today, my blog is being critiqued by Laura Barnes over on her site, Laura B. Writer: Building Author Media Presence. So please, if you don't mind, steer clear of there.

And since it's a big holiday this week here in the States, I wanted to wish you all a Happy Thanksgiving! In honor of the day, here is my short list of silly and serious thanks (my long list would take too long, but I'm sure you all understand it's there, right?):
What are you thankful for?

So it's lunchtime at the writing conference. My friend and I had been at separate sessions just prior so I'm looking everywhere for her in the dining area. When I'm certain she's not there, I find a mostly empty table and ask the women sitting there if they don't mind if I and a friend join them. Of course they graciously let me sit.

I found my friend, sat down and after catching up, turned to our neighbors. It was a woman and her 13-year-old daughter. Very nice. Her name was Bonnie. So here's a bit of the conversation that ensued:

BONNIE: Have you attended many conferences?

BONNIE: [shrug] Yeah, I've presented at quite a few conferences.

SENIOR EDITOR BONNIE: [graciously ignoring my red cheeks] So what do you write?

Okay, so the point of this little story? STUDY THE LIST OF PRESENTERS BEFORE YOU GO. Cyber stalk them. Find their picture and know who they are. In fact, the conferences usually post these on the website. Then maybe, just maybe, you can avoid embarrassing yourself like I so thoroughly did.
Posted by Janet Johnson at 6:14 AM 14 comments

I spent this weekend in Gettysburg at the Tri-regional SCBWI conference. I had a great time, refueled my writing bucket, and met so many wonderful people. Okay, that sounds trite, but it's true.

Though we are limited in what we can share because of copyrights, I wanted to share one little nugget with you all:

In a session with Sarah Davies, Agent Extraordinaire of The Greenhouse Literary Agency, she said that about 50% of the submissions she receives start with one of the following opening scenes:
What do they all have in common? They are all literal beginnings. Interesting, no?

She commented that when she sees this, though it sounds harsh, her expectations drop. It's an immediate strike against the manuscript which takes amazing writing to overcome.

Instead, start in an unexpected place, and you'll already be one up from about half the submissions. . . . The middle of a heist. Feeding the pigs. At the top of the school's flag pole. Standing on cloud 9 (literally). In a graveyard digging up a grave. At the scene of a murder.

Perhaps we just need to give ourselves permission to go a little crazy. I mean, we are writers, write? (I mean, . . . right?)

Where does your book start?
Posted by Janet Johnson at 6:22 AM 17 comments 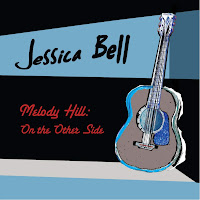 Today is THE day to help Jessica Bell's debut,  hit the bestseller list on Amazon, and receive the all-original  soundtrack, Melody Hill: On the Other Side, written and performed by the author herself, for free!

All you have to do is purchase the book today (paperback, or eBook), November 11th, and then email the receipt to:


If you are not familiar with ,
check out the book trailer:
Rave Reviews for String Bridge:

“Jessica Bell’s  strummed the fret of my veins, thrummed my blood into a mad rush, played me taut until the final page, yet with echoes still reverberating. A rhythmic debut with metrical tones of heavied dark, fleeting prisms of light, and finally, a burst of joy—just as with any good song, my hopeful heartbeat kept tempo with ’s narrative.” ~ Kathryn Magendie, author of Sweetie and Publishing Editor of Rose & Thorn Journal
“Poet and musician Jessica Bell's debut novel  is a rich exploration of desire, guilt, and the difficult balancing act of the modern woman. The writing is lyrical throughout, seamlessly integrating setting, character and plot in a musical structure that allows the reader to identify with Melody's growing insecurity as her world begins to unravel … String Bridge is a powerful debut from a promising writer, full of music, metaphor, and just a hint of magic.” ~ Magdalena Ball, author of Repulsion Thrust and Sleep Before Evening
“Jessica Bell is a brilliant writer of great skill and depth. She doesn't pull back from the difficult scenes, from conflict, pain, intensity. She puts it all out there, no holds barred, no holding back. She knows how to craft a scene, how to develop character, how to create suspense. This is an absolutely brilliant debut novel. I look forward to reading her next novel, and next and next.” ~ Karen Jones Gowen, author of Farm Girl, Uncut Diamonds and House of Diamonds
Connect with Jessica:

It snowed here the other day.


Unawares, my 2-year-old ran outside and in a case of sheer serendipity, my friend caught the exact moment of discovery. 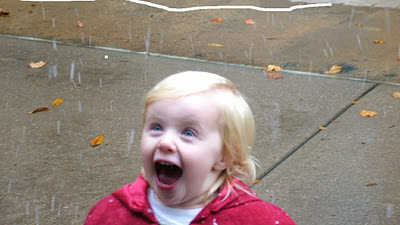 You can see the joy radiating from her face. Shining through her eyes. Bursting from her whole being. I'm completely in love with this picture (and not just because it's my daughter)!

Do you remember what it's like to feel that way? Do you ever want to burst with joy after writing a particularly good bit of work? After receiving a glowing critique?

P.S. I deeply apologize for lack of responding to comments! My internet has been spotty at best. Hopefully things will improve next week when we switch providers. *grumble, mumble, asparagus*
Posted by Janet Johnson at 6:45 AM 24 comments

As an incurable book fanatic, I am at an exciting time in my life as my oldest child is just getting past that initial learning-to-read stage and discovering the freedom that books can bring.

Nightly homework requires 20 minutes of reading, and his teacher strongly recommends that he try reading all genres, including non-fiction. Thus, at the library, I checked out a short book on Christopher Reeve. My son couldn't put it down and read till he had finished (long past the timed 20 minutes). Every mother's dream, no?

I still remember how shocked I felt when I heard about his horse accident. It seemed impossible that such a man--the epitome of physical strength--could find himself in such a situation.

After the accident, Christopher was ready to give up . . . certain that he would only become a burden on the people he loved. But lucky for him (and us), his amazing wife, Dana convinced him otherwise.

As a quadriplegic, Christopher Reeve accomplished more than most people can with the use of all their limbs. He even helped fund the American Paraylsis Foundation that is now aptly named the Christopher and Dana Reeve Foundation. He never stopped working to improve his and others' situation, and he never stopped believing he would one day walk again. (Something that his doctor's claimed impossible for an injury as severe as his. After all, he couldn't even breathe without help!)

And then the miracle happened. He moved his index finger. And little by little, he regained control of some of his muscles. He could move some fingers, and he could walk on the bottom of a swimming pool. And he could even breathe for 90 minutes without the use of his ventilator.1

Unfortunately, he died shortly after this triumph, but what hope and what inspiration he gave to those who had had none! Those who had been told to accept their lot and go on. This man who once dressed up and pretended to play a superhero for all the world to see went on to become one in real life because he didn't give up. He took a personal tragedy and blessed the lives of countless people with it.

And that is what we must do. There have been times I've wanted to give up (on writing, not life, just to be clear), but then I'd never know what I might have accomplished if only I'd tried--if only I'd forged ahead, even when it was hard.

1. http://faculty.washington.edu/chudler/reeveu.html
Posted by Janet Johnson at 6:43 AM 22 comments

SPECIAL EDITION: This vs. That - Trick vs. Treat

First, I want to thank all you great people who have stopped in and commented . . . and apologize for not responding*. Life has been hectically crazy here. I'm sure most of you know all about craziness. Especially the week of Halloween, which brings me to the REAL purpose of this post: The results!

Okay, no real surprises here. Who wouldn't like a treat? However, who said the trick had to be mean? SO . . . I voted for Trick, because I am playing a trick on all of you.

Random.org spit out a number, and the number was Old Kitty's. Just send me your address within 24 hours if you dare, and I will send you something that is NOT a treat (bwa ha ha!).

If you miss the 24-hour mark (aka, 7 AM Nov. 4), Random.org will choose a second someone and so on and so forth. Even if I have your address, you still have to e-mail me! (see that "Contact Me" tab up there? Use it!)

*If you have your email address connected to your account, I reply by email to your comment
Posted by Janet Johnson at 7:00 AM 14 comments