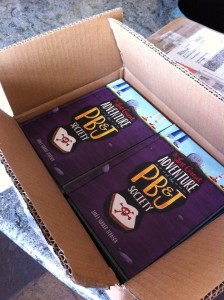 A mere four days until The Last Great Adventure of the PB&J Society is launched into the world!!

My mind is boggling, and I hope you can forgive me if I wax a bit nostalgic . . . because I am in awe that this story – one I started on a whim – is going to find its way to readers throughout the world.

Almost exactly twenty-one years ago, I wrote the very first chapter of this book. Another six years passed before I admitted to myself I wanted to be an author, and I spit out a first draft in a mere three weeks.

It only took one rejection to realize I had a lot to learn.
And so another eight years passed while I studied books on writing, attended writing conferences, acquired critique partners, and wrote and wrote and wrote. That’s when I stumbled on that early draft.

It needed a lot of work. Like an actual plot and stuff. And honestly, it was painful to read because it was a testament to just how ignorant I’d been on the craft of writing. But oh the characters! They jumped off the page and I fell in love with them all over again.

Two more years of writing and revising before I found an agent, and another two to find a publisher.
The road has been so much longer than I ever imagined. But oh my heart! To hold in my hands a thing that I created in my head . . . simply indescribable.
Posted by Janet Johnson at 7:50 PM 0 comments