As you may know, Amy Sonnichsen, founding member of the Hacky Sack Club [HSC] recently signed a book deal!!!

We've been bouncing off the walls with excitement for her. BOUNCING.

So. This is the kind of thing that we at the HSC can't just let go by without doing something crazy. So Melissa Sarno and I got together. I flew in to New YorkWe Skyped and emailed and Googled and came up with a fabulous way to express our congratulations to Amy while embarrassing ourselves in a HSC kind of way.

As it turns out, Melissa is a sound and video editing genius, so for your viewing pleasure, we present to you our video [And YES! That is Melissa and me singing TOGETHER even though I did not get to fly to New York. She's brilliant, I tell you!]:

Congratulations, Amy! We're On Top of the World right there with you. :D
Posted by Janet Johnson at 6:00 AM 17 comments

Today I have a story to tell. See this picture? I took it at a rest stop in Wyoming. 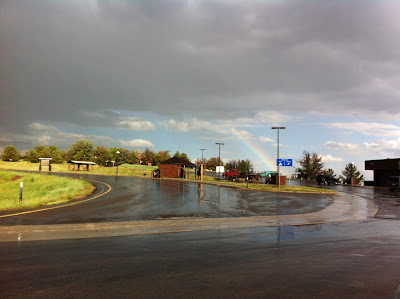 But this is more than just a picture. It is a visual representation of the first twelve hours of my road trip.

I did all the packing, and I thought of everything. I pretty much packed the kitchen sink AND the bathroom sink. Alas, about four hours into the trip, I realized the one thing I forgot . . .

Yup. It would have been better to have forgotten ANYTHING else. I couldn't just drive back because I had less than a half tank by then. My husband couldn't just wire me some money to the closest town because you have to have picture ID to pick it up. He could mail my wallet to my destination, but what good would that do me when I had no way to drive the remaining 700 miles of my trip?

I was pretty much a mess, but I had kids in the car, so I had to pretend like I was calm and in control. (Which lasted . . . oh, not very long: "STOP WHINING! I have no money, no way to go home, I need to THINK!! And I can't do that with you kids fighting over who touched who!")

To give him credit, my awesome husband was ready to jump in the car and drive the 4 hours to meet us (EIGHT HOURS ROUND TRIP!!!). I just didn't like that option.*

I called my credit card company and they said they couldn't do anything from there. BUT, if I could convince a cashier to call them, they could approve a card-less transaction because I could prove my identity over the phone. I stopped at four different gas stations. At each one I politely explained my plight and asked if they could help, but they all refused. By the fifth gas station I was in tears. Funny how they were suddenly willing to at least try.

Hurray! I filled the tank, but it was not enough to get to my destination. So next,  I called home to tell them the situation. Amazingly, my sister was leaving that minute on a work trip heading my direction. She would pass me some time in Wyoming and wanted to meet in Laramie. I calculated distances, and realized gas-wise, it would be pretty tight, BUT, from Laramie, one tank of gas could get me to my destination. Maybe. Barely.

Yeah. So I bit my nails, white-knuckled the steering wheel, and ignored that sick feeling in my stomach until I finally got to the top of the mountain pass. Which is when my car said I could go ZERO miles. But I was at the top of a mountain pass! It was downhill the whole way! And don't those mileage counters have a little padding built in?

Well, if my kids hadn't been with me, I might have tried it. Instead, I stopped at the Lincoln-head rest stop right there at the top: 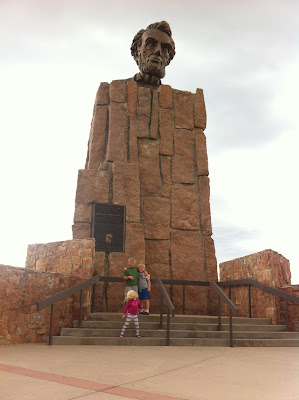 Happily, my sister knew right where it was because of good old Mr. Lincoln there. She brought me a gas can and loaned me enough money to get me to my destination. It was like the picture. The moment the dark stormy clouds start to disperse and the sunshine breaks through, bringing with it a rainbow and a promise of better times.

It's kind of a good analogy for all sorts of things. Life. Writing. Overcoming obstacles. Alas, we have to face hard things all the time. Things that seem impossible to overcome . . . when the easiest or most obvious solutions aren't acceptable and you have to really FIGHT for something better. Keep trying even when you've been rejected how many ever times, and feel like it's hopeless.

This trip will forever after be remembered as "The Time I Drove Across Country Without Any Money." And when I think of it, I will smile. Because despite the odds, despite the stress, I did it. It took a lot of help, and a hero (my sister) had to swoop in to save me, but I did it.

And I can do it again. Next time I face insurmountable odds.**

Have you ever overcome insurmountable odds? Tell me about it!

And P.S. If you haven't already, don't forget to enter my giveaway!

*The whole point of the trip was to GIVE HIM TIME, not waste it!!
**Which will not be forgetting my wallet on a cross-country trip, because I will NEVER, EVER do that again. ;)
Posted by Janet Johnson at 6:00 AM 13 comments

So when I making plans to travel this summer, I had this conversation on Twitter: 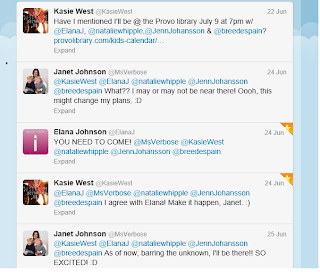 So look who else I met this summer!﻿ 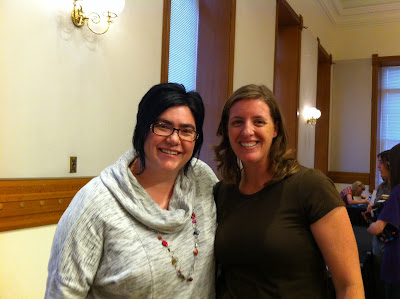 Yep, the one and only Elana Johnson (@ElanaJ), who may or may not be a long-lost distant relation (I mean, hey, if we go back to Noah, we for sure are!). She is just as cool in person as she is online. The type you want to cozy up with on a couch while eating a big plate of bacon while you watch crazy movies.

Right now she is up to her ears in WriteOnCon, which STARTS TONIGHT!! (Though the forums are already in full swing. Go check it out if you haven't.)

I also met the amazing Kasie West (@KasieWest)! (And her super cute daughters). If there hadn't been a line of people behind me waiting to get their books signed, we might have chatted all night. 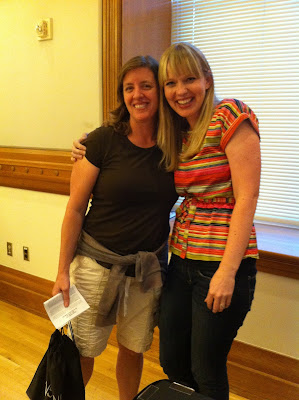 And and and . . . I got to meet the super sweet Jenn Johansson (@JennJohansson), the crazy cool Natalie Whipple (@nataliewhipple), and the fabulous* Bree Despain (@breedespain).

Seriously, these are my people. And see that black bag in my hand in the picture with Kasie? Yup, totally swag I won. It even came with "Insomnia Pills"**

So of course, to celebrate having met so many amazing authors in one shot, I wanted to do I GIVEAWAY!! One lucky person will win their choice of any one book currently published by any of these authors:
This giveaway is open to anywhere The Book Depository delivers and is open through the end of August 2013. I'll announce the winner the first Monday of September. Good luck!

I'm being all kinds of modern and using a rafflecopter, so just fill it out and I'll cross my fingers it all works the way it's supposed to.

So what book would you choose if you won?

* Yeah, I couldn't think of another good "F" word to go with "fabulous" to keep it all parallel. I debated "freakishly fabulous," but that wasn't quite right. "fascinatingly fabulous" was better, but a bit of a mouthful. "flailingly" just doesn't fit, same with "flinchingly." "Flightily" is really stretching things, "fantastically" felt a bit overdone . . . Well, you see my dilemma.

** Jenn Johansson ASSURED us that they were CANDY. Not real pills. And she was 100% correct. Candy. Not pills. :)
Posted by Janet Johnson at 6:00 AM 14 comments

I'm back!! And I have so much I could tell you. So much that you'd be astounded by my amazingly full summer. These events might include but are not limited to:
Yep. My summers are always epic, and I have rules to share and everything. But I am not going to talk about these things today.

Because today I actually have a GOOD experience to talk about. And not just good.

Have you ever met someone online who is the bomb? The kind who inspires and lifts and makes you want to be not just a better writer, but a better person? And then you learn they are not only the bomb, but a kindred spirit . . . and not just any old kindred spirit, but one who GETS your crazy, AND has the same crazy herself?!! Someone who would do this (not to mention this and THIS) for the sake of solidarity and connecting with others? 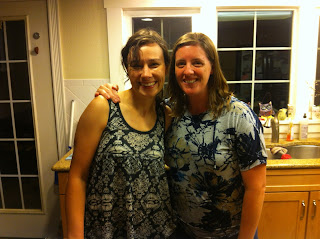 When Amy Sonnichsen and I "met," we lived on opposite sides of the country and I never thought I might get the chance to meet her in person. But this summer the stars aligned and it actually happened!

She is even more fun in person. We had a blast together, and as co-founders of the Hacky Sack Club, you KNOW we had to video something. *Big grin*

Alas, blogger is stubbornly refusing to let me post said video, but you can watch it here or here.

Have any of you gotten to meet a blogging/twitter/online friend? How'd it go?
Posted by Janet Johnson at 6:00 AM 16 comments