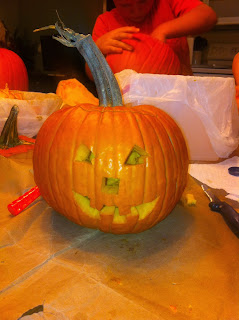 This is the pumpkin I carved with my family. I am definitely a traditionalist.

So my good friend Susanna Leonard Hill holds these wonderful children's story-writing contests on her awesome blog (if you haven't visited, you should) and I never enter. So I mean to rectify that. Here are the rules:

Write a 100 word Halloween story appropriate for children (title not included in the 100 words), using the words spooky, black cat, and cackle. (black cat can count as 1 word and title not included). So here is my entry:


Brewster, the fat black cat, loved Halloween only second to chocolate. He ate it all the time.


Brewster hopped on the broom. Tensed for take-off.


But the broom wouldn't go.


It hummed and whirred. Rattled and shook. Shuddered and Drooped.


Brewster was too fat.


So the witch kicked him off and zipped into the sky.

Finally, I wanted to let you know that I will not be around for the month of November. For the first time EVER, I will be doing NaNoWriMo. I'm a touch nervous, but I've outlined until I can outline no more, and I'm excited by the idea, so here's to hoping it all goes well!

For those of you who have done it before, I'd love any hints or suggestions! Otherwise, I will see you on the other side. :)
Posted by Janet Johnson at 4:29 PM 38 comments

This past week I read my very first Agatha Christie novel.

Last night, I finished And Then There Were None. Just saying, I might have had trouble going to sleep. Agatha Christie is amazing!

But what I loved best was the Author's Note at the beginning. It was an excerpt from An Autobiography (obviously hers):


"I had written this book because it was so difficult to do that the idea had fascinated me. . . . It was well-received and reviewed, but the person who was really pleased with it was myself, for I knew better than any critic how difficult it had been."

I love that! I love that she openly admits how hard it was to write this. Agatha Christie, pretty much the best-selling author ever, had to WORK for it. And she didn't let the hardness of it stop her. She pushed through until she succeeded. Until she'd written a perfectly chilling book that confused and baffled, yet had a logical explanation.

The woman was brilliant!

And I say that not because everything came to her easily. I say it because she didn't quit. She pushed herself to continue. To solve the puzzle. To do the nearly un-doable.

And when she'd finished, it didn't matter what others thought. She knew what she had accomplished.

What are you pushing yourself to achieve?
Posted by Janet Johnson at 6:00 AM 13 comments

Celebrities with NO Make-up, Writer Edition

I'm sure you've seen them. Those picture-articles titled something like: "What Celebrities Look Like With NO Make-up!"

I believe they are supposed to make us feel good, because even the Stars don't look like Stars all the time!* Which brings us to the logical conclusion that if we had our own personal make-up artists and wardrobe consultants, we, too, would look like Stars. Right?

In fact, this whole idea inspired me to share such a comparison of myself: 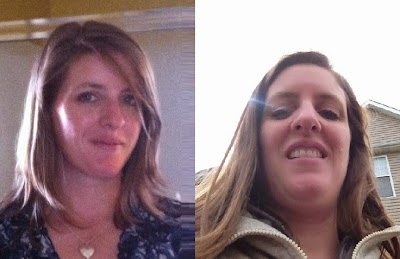 Now, I know these pictures look like a before and after for some weight-loss program, but you should know:
So all these things being equal, what is the real difference between these two pictures? Why is one extremely not-so-nice, and the other so much better?
The answer? Effort.
In the not-so-nice one, I am not sure if I took this picture or if my husband did. Maybe it was even one of the kids. Clearly the photographer gave no thought to getting a nice picture. Snap, and it was done.
In the other picture, I took 21 pictures, adjusting something each time until I got a picture I liked. First the lighting wasn't right, so I tried some different locations. Then the angle of my face bothered me. Next it was my smile, then where my eyes were looking. After 20 little tweeks and nudges, I decided I was satisfied. In short, I put forth a lot of work and effort to get something that I felt was presentable.
This, dear peeps, is why we revise. Why we get beta readers and critique partners. Why we read and re-read our work and make changes until our eyes bleed. Because seriously, can you imagine sending that not-so-nice picture to an agent or editor?
I thought not.
*And I'll give us all the benefit of the doubt that we like those Stars better for it, and feel the indignity of what the paparazzi subject them to, because who would like having their picture taken in all their worst moments?
Posted by Janet Johnson at 6:00 AM 11 comments

Today I wanted to share a quote that I found inspiring:


"Doubt your doubts before you doubt your faith." -Dieter F. Uchtdorf

It is no wonder that doubts creep in: Is my writing good enough? Do I have what it takes to continue? Do I have any ideas worth sharing with the world?

And really this is what it all comes down to. Our success is not so much based on our inherent ability, but on our determination to keep trying even when we doubt. Even when it seems impossible. Even when it feels like the world is telling us to quit.

We must cling to the faith we have in ourselves. The faith that our hard work and determination can conquer any odds.

We CAN'T let doubt pull us down. Because we CAN do this!

Posted by Janet Johnson at 6:00 AM 8 comments