The Art of Making Macarons

Today is not a Monday. I'm not usually blogging on Wednesday.

But last night we did a thing that simply must be documented. A quick pic and done on social media will simply not do.

Summer Bucket List 2020 has been different than past years. With the Pandemic, we knew we'd be staying close to home, so we challenged ourselves with homey things. Middle child, who loves to bake, added "Learn to make Macarons."

Confession: I don't actually love macarons. And having heard from many, many, many sources that macaron-making is finicky and extremely difficult, and would likely take many tries to get it right, I really had no desire to make macarons. None.

But confession aside, I also believe in letting my kids try things that interest them. So here we go.

First of all, if you want to learn HOW to make macarons, with all the tricks, I highly recommend The Preppy Kitchen. John Kanell is entertaining, humble, honest about how hard they are to make and his own failures, and super detailed. We read the entire post, and watched the video several times as we worked on our macarons.

For the record, our (spoiler alert) failure is in no way due to his instructions. 😂

We started out in good spirits. We knew prepping the almond flour would be work, but it seemed a fairly easy first step to get right. Basically you sift the almond flour and powdered sugar to get rid of the biggest bits. So we sifted . . . 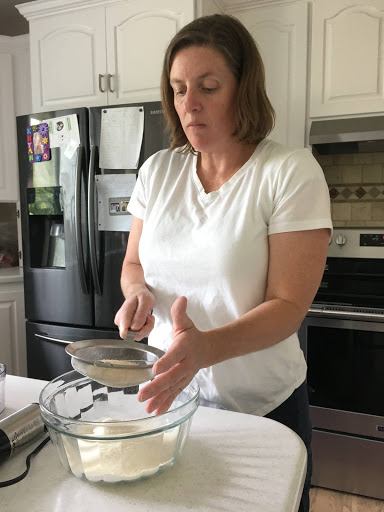 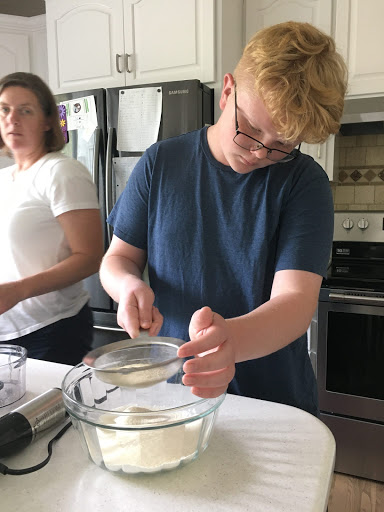 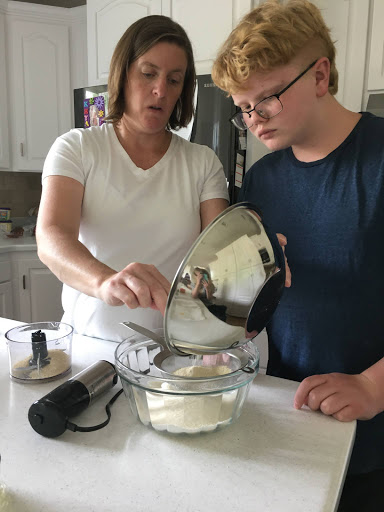 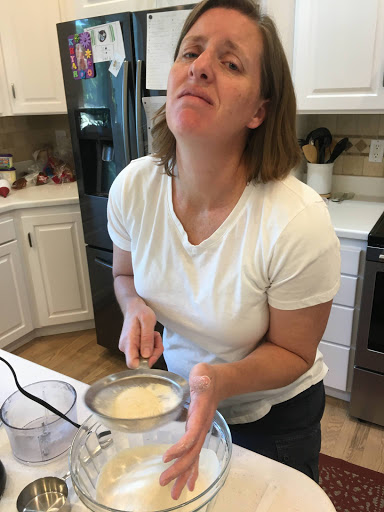 And mom, it's been a miserable THREE hours of sifting, and DO NOT take my picture! 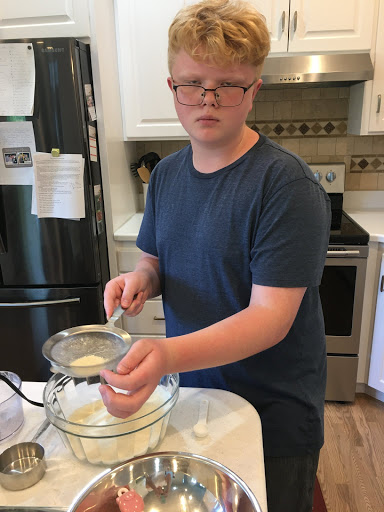 So I think our sifter was a bit TOO fine, and if we ever try to make these again, a new sifter will be something we would DEFINITELY purchase. It is also possible that the Great Value brand of Almond Flour (labeled as "Superfine") was not a good purchase. (For the record, my husband did the shopping, not me. 😉)

By the time we almost had the flour done, both middle child and I were exhausted and ready to call it good for the day. But lollipops and gumdrops! We had come this far, our eggwhites were AGED (yes, you have to age your eggwhites!) and at room temperature, WE WERE GOING TO FINISH!

So I had my son start on the meringue while I finished the sifting. Seriously. That was not a good deal on my part. But parenting and sacrifices and grumble mumble.

I did not remember to take pictures of the early meringue making. Suffice it to say, it also took A LONG TIME. Just not as long as the stinking sifting!

Happily, the mixer does most of the heavy lifting at the beginning, so we only had to finishing whipping that meringue into a thick, marshmallowy mass. 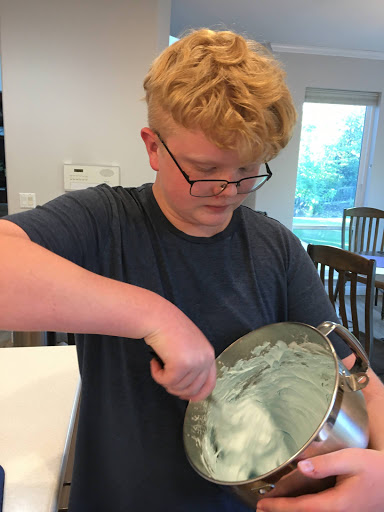 John Kannel (of the Preppy Kitchen) emphasized that the biggest mistake most macaron-makers make is not whipping their meringue long enough. Middle Child wanted to be thorough, so about the time I thought it was done he said: "Thirty more minutes by hand!"

Hahaha, yeah, not happening. Instead, we tried the upside down bowl test that John suggested, and we were gold. Middle child really liked that test. 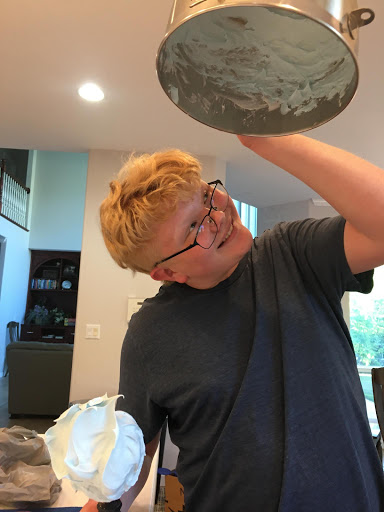 Next came the folding in of the flour (wretched flour!). This may have been where we failed. Something about getting out the big air, but keeping in some air . . . yeah, it was all a bit opaque to me, but I did my best. 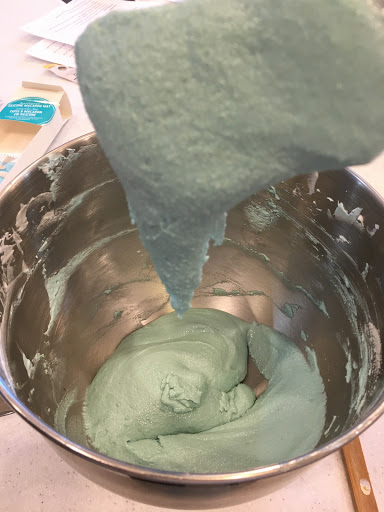 And no pictures of the actual piping because we were busy piping. Yeah, piping isn't really a skill we have either. So. 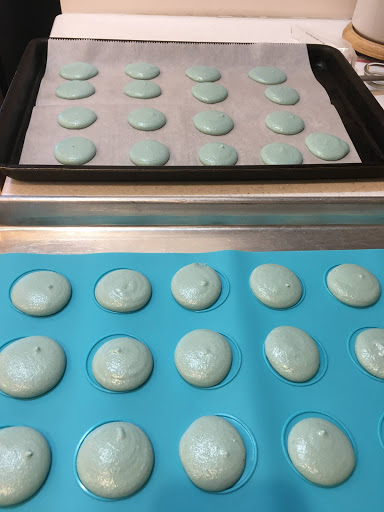 After having watched the video, we splurged and got a macaron mat. It was supposed to help them form the wall and kind of fix our bad piping. But . . . 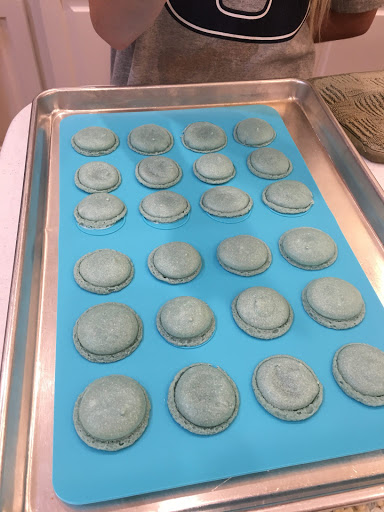 And turns out, we didn't cook them long enough. That is a big bad mistake, my friends. Big BAD. 😳 I mean, ruinous, really. 😩 (I'm not crying, you are!)
Ahem. So while the parchment paper ones were even more irregular, at least they were cooked long enough. 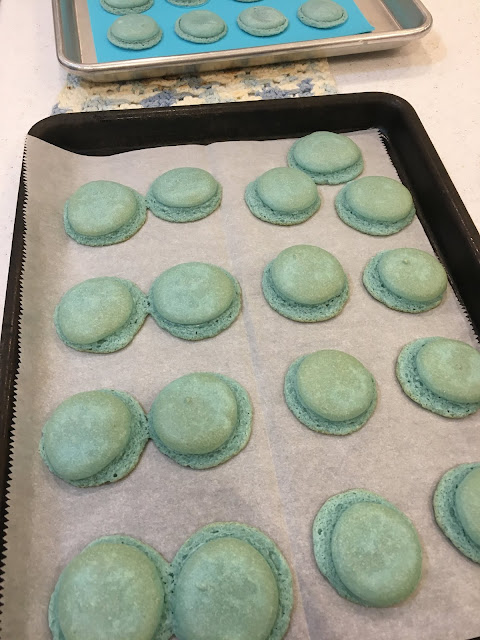 Yeah, yeah, yeah. I KNOW they look awful! But turns out, awful-looking does not equal awful-tasting. So there is that.
Next up, we went for the French buttercream filling, because as long as we're trying hard things . . . So middle child started whisking the egg-yolks . . . 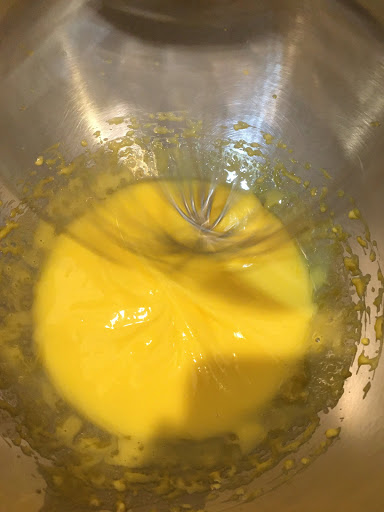 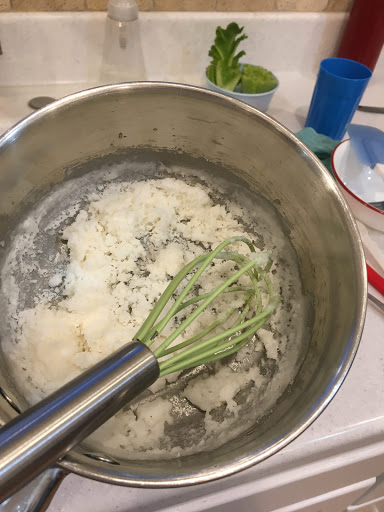 What? That doesn't look like soft-ball sugar to you?
This is actually failed attempt number two. 😂😆😭 (I can laugh now, but let me just tell you that it was not pretty last night. Not pretty at all. Middle Child kept trying to chat with me and I may have exploded. Then hard-working husband called right at the crucial moment (why yes, he was still at work at 8:30 last night, why do you ask?), and I didn't take his call! 😬 Oh, the stress!!
Turns out I don't actually know how to use a candy thermometer. (Yes, really, Mom. And yes, I am actually your daughter.)
Once I figured that out (on attempt 3), it all went swimmingly, and voila! Beautiful, yummy buttercream. 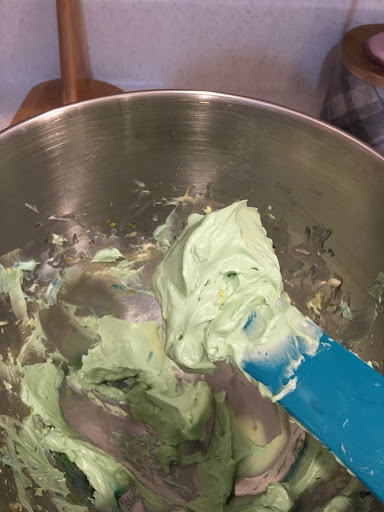 But even beautiful buttercream can't fix undercooked macarons. Which means that after about six hours of arduous labor in the kitchen (SIX HOURS), this is all we have to show for it. Seven, crumbly, crackly, over-airy . . . but DELICIOUS macarons. 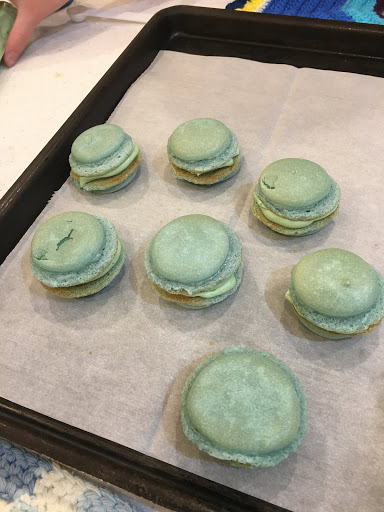 Oldest child very willingly test-tasted them for us and gave us his unbiased opinion of their tastiness. (I mean, he eats moldy bread, but whatever, we'll take it!) 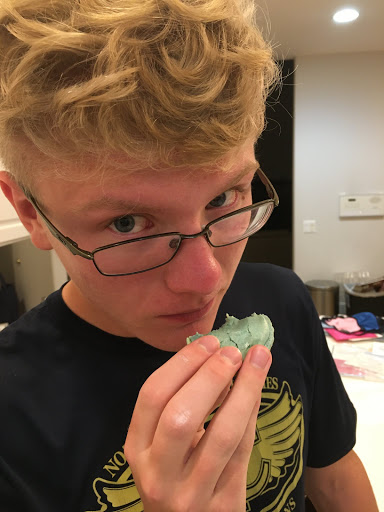 As we were finishing up, middle child asked, "Should I start aging some egg-whites so we can make chocolate ones tomorrow?"
😂😆😂 So you see? Even after six grueling hours, he still had his sense of humor. (We did not start those egg-whites) 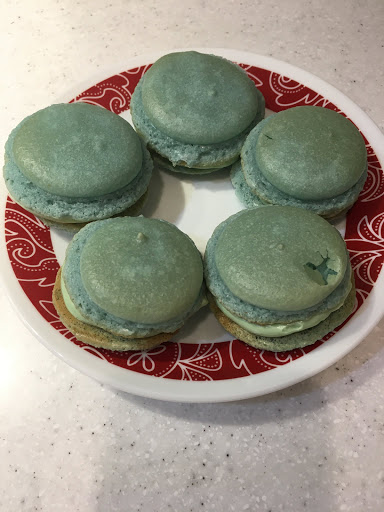 You get awards for tenacity! Laughed at your blog so there is that, though its probably too soon for you to laugh. I think my max kitchen effort for new recipes was trying to do 2 Bobby Flay recipes for dinner-a cabbage slaw and crab cakes and no one liked either one after like 2.5 hrs in the kitchen. I will never again try his recipes 😂

Thanks, Leanne! Though I am definitely already laughing. It was one for the books, and now I can say I've done it. Sigh, middle child still wants to try again, so we'll see how try number 2 goes.

I don't know Bobby Flay, but urgh! That's the worst when you spend so much time making something and then no one likes it. :(