The Worth of a Thing

Our next stop in Paris was St. Chapelle. 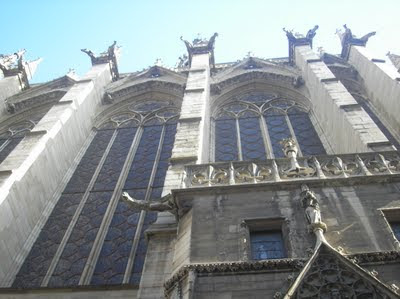 Yeah, I didn't get a great picture of it. I'm hoping you'll forgive me.

Anyway, this little chapel was built near Notre Dame in 1246 by Louis IX (the pious Louis). Louis commissioned this chapel to hold some holy relics he'd purchased---namely the crown of thorns worn by Jesus on the cross, as well as a splinter of the cross.

Were they the real deal? Obviously Louis IX thought so, because he paid 135,000 livres for just the crown. Now, I can't tell you how much that is in today's money, but to give you a comparison, he paid a mere 40,000 livres to build the entire chapel.

Once you go inside, you'll find that the pillared walls are merely there to support the endless stained glass windows. When the sun hits just right, the effects are amazing! 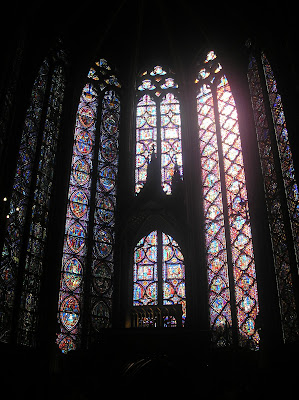 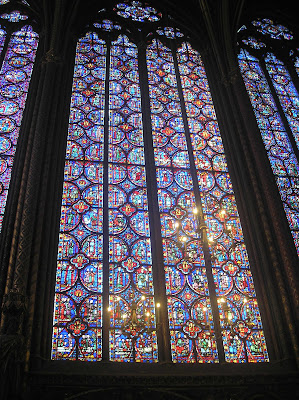 My pictures really don't do it justice.

So my writing analogy for the day? Well, maybe this will apply to life-in-general, too.

It would be easy to assume that the worth of St. Chapelle is in the glamorous and showy stained glass windows. But Louix IX never saw it that way. Its value was as a shrine to two holy relics that might easily have been overlooked by most people. Items that were rustic and plain. Items that were simple. But not common. Definitely not common.

As writers, we sometimes want to base the value of our work on outward facts . . . how many requests we get for our manuscript; how many books we sell once we're published; how many fan-pages are dedicated to us; how many people tattoo our mc's name onto their bicep. Well, you get the idea.

But I don't think worth comes from any outside source. I think that worth comes from the sweat and tears we put in. From our hard work. Though the stories we produce may be the most horrid things ever written (hopefully not, of course!), they have value for what we gain from them. For what we become from having written them.

I grew up hearing that it's what's on the inside that counts. And though I groaned every time I heard it as a kid, I embrace it now. I am not the same person I was before I started writing. I see the world differently, and I appreciate things I wouldn't otherwise appreciate. I have gained skill and insight. I have gained respect for others' work . . . no matter what it may be.

Even if I never get published, my time spent writing is not wasted, and neither is yours.
Posted by Janet Johnson at 6:18 AM

I LOVE this post. This is EXACTLY how I feel. It's why I won't jump on the indie bandwagon just because I need to see my name on a book. I'm not writing for that. I'm writing for something deeper. And if I'm never published, I'm okay with that. I've worked darn hard to get this far, and I'm proud of what I've done.

Ohhh you lost me at the windows. LOVE them. I think I'll just steal one and make it my background for awhile...

This is lovely, Janet! For a wide variety of reasons.

Yes, the windows are practically impossible to capture on film. Especially in static pictures - maybe video works better or a high quality film? I don't know, not having access to such things. LOL

Stina, I can see your point, but I'm going to debate you on it anyway. LOL I think some folks go Indie PRECISELY because they are proud of their work and want the world to be aware of it as well. I've seen enough now to realize the market (big house publishers/editors) will not take on niche market books right now and it's not because the books aren't excellent. It's because they don't believe there's money in it. That's why Indie publishers are so necessary. Just my .02, of course.

Beautiful sentiment here. I think it's the very intent of that chapel that gives the architecture and windows their beauty. Is there anything left of those holy relics Louix IX purchased?

Wow, those windows are amazing! I hope my time writing isn't wasted. =) Great post. Thanks!

That's a lovely post. I love the way you tied your trip in with your writing. Excellent advice!

it really is hard for a camera to do those gorgeous windows justice. I'm very jealous of your trip, just fyi... :D LOL!

*snort* P.S. I also liked your bit about the worth being on the inside... I'm easily distracted. Like that dog in Up. :D

I love this! And those pictures are gorgeous!

What a beautiful post, Janet! The pictures are lovely and what you said about writing and what you are inside that counts. Thanks for sharing and the encouragement!