First, thank you to everyone who stopped in last week and participated. Vicki and I had a great time battling it out and reading all the votes and comments. You guys are a total riot!

So without further ado, here are the brawl results and winners:

And Vicki is the winner! Man, I knew I'd lost as soon as I read hers. She's just too good! So head on over to Vicki's blog for Monday's daily winner.

And I'm the winner! Woo hoo! You guys are awesome for pulling this one out for me. :D 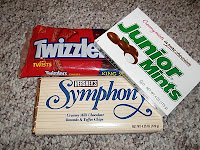 And the winner of the day is Lenny Lee! Congratulations, Lenny! Here is the fabulous daily prize he won. I know, you're all jealous. But every good writer needs some snacks to pull through those rough patches. ;)

The answers to Vicki's quiz are:

1. Which of the following celebrities have NOT been mentioned on Vicki's blog?
b. Mark Wahlburg

2. The artist who painted the picture Vicki uses as her icon is :
c. Alfred Gockel

3. Ever the fan of odd writing analogies, which of the following has Vicki NOT used?
c. Writing is like popping a zit

4. Which of the following was NOT a title of a post?
c. Tickling Turtles

5. What is the working title of Vicki's WIP?
b. Porcelain God

The answers to my quiz are:

1. Which This vs. That debate has NOT been featured on Janet's blog?
c. Spring vs. Summer

2. Janet professes to speak another language. Which one?
a. French

3. What obsession (besides writing) does Janet constantly blog about?
b. license plates

4. What celebrity does Janet pose with in her profile picture?
d. Oscar the Grouch

5. Janet did a 4-part series on what topic?
b. Clichés

Ouch! I think this was a combination punch. Poor Vicki, she never stood a chance. ;) 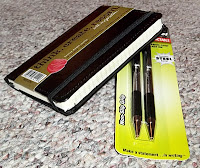 And the winner of the day is Yat-Yee! Congratulations, Yat-Yee! And here is a sneak preview of what you'll be receiving in the mail. Because every good writer needs a handy-dandy mini notebook to jot down all those fabulous ideas that hit at the oddest moments. And of course pens you can trust to actually write when you need them. (I didn't defend pen and paper for nothing!)

This vs. That Thursday:

Yikes, I really thought I stood a better chance, but alas. I guess even I can't stop the steamroller that is technology. But I can admit defeat, so head on over to Vicki's blog for Thursday's daily winner.

Before announcing the Grand Prize winners, I had to show you how I'm feeling after a week of duking it out with Vicki: 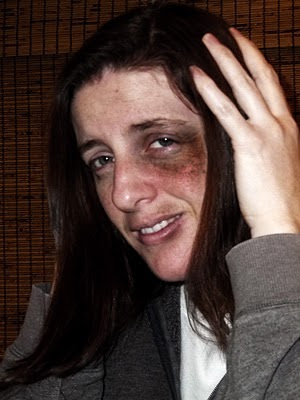 Photo courtesy of Reb's Photo World
She's a hard hitter and a worthy opponent. I suppose technically we're at a stalemate, having each won 2/4, but for future reference, I'll think twice before messing with her!

Okay, now on to the part you've all been waiting for. The Grand Prize Winners!


Margo Berendsen!
Congratulations to the winners! Please contact me as soon as possible with my "Contact Me" tab, and I will get you taken care of.

Also, I want to thank Vicki for playing along with me all week, and I want to thank Sarah for so generously offering a ten-page critique! I'm kindof sad this has come to an end. :(

And finally, my big news is that I'm heading off to France tomorrow (squee!) so I won't be around the blogosphere for the next little while. But, darling husband has agreed to peek in from time to time and fill in for me. I have no idea what he'll say. I might be a little worried. Wish me luck!
Posted by Janet Johnson at 8:00 AM

Congrats to all the winners, what a nice way to begin the week.

And Bon Voyage ... have a wonderful journey to France! Wishing you many good times there :)

Congratulations to all the winners! This was so much fun, Janet!

Thank you so much. I love my prize! And ouch, that picture!

It was a fun contest. Thanks!

Congrats to all the winners!

Congratulations to the winners! Have a great time in France!

CONGRATS to all the winners!

Janet, have a great time in France!

Many, many congrats to all the winners!

Janet, have an awesome time in France! Bon Voyage! :)

Oh my goodness! That's quite a 'shiner' in that picture! Congratulations to the winners!
And have a fun-filled, inspiring, and beautiful time in France!

Congrats to the winners. And that 'shiner' looks ouchy ;-)

this was a fun and silly contest, and I had a blast playing along! Yay to the winners, and yay to Lenny~ :o) <3

First of all, THANK you!!! Second of all, OMY I thought that photo was of you! But then I noticed the source so hoping maybe not. And third, FRANCE!!!! You lucky dog. And fourth --- I would NEVER let my husband get on my blog. You must really trust him!

Congratulations to the winners. And France? Sounds like a wonderful trip!

Congratulations to the winners. Katie Kelly where are you? More bloggers need to attach their e-mai to their blogger profile so this doesn't happen!

Congratulations to the winners. And lucky Katie ... if she ever claims her prize!

@Margo the photo is a real photo of Janet. However the shiner is not real!!!! I love photoshop!

Congrats to the winners!