We found out that Mount Vernon is FREE on President's Day, so since Rick happened to have it off, we took a little family trip. It was very cold, and we, in our hurry to get going, failed to bring hats, gloves, and boots.
Woops.
I have to say, our kids were troopers. London had a billion and one questions, and Brandt found the muddy walkways fascinating and horrifyingly dirtly all in one. Even Khyah was happy being outside and with the family. There was so much to see and do, that we've already decided we need to go back (when it's warmer). But I won't bore you with too much of our adventure all at once. I prefer to spread out the torture over several entries. :) Well, at least 2. 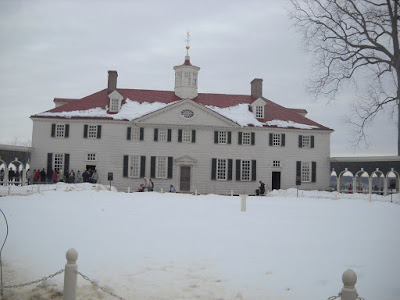 The picture is a little crooked, but here it is, Mount Vernon. 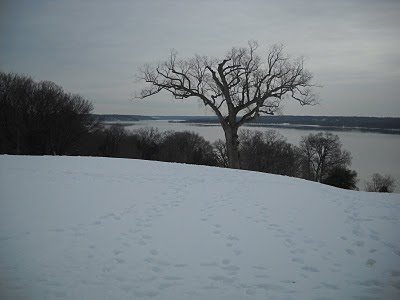 This is the view from the back porch. Can I just say . . . WOW! Beautiful. When I grow up, I want a view like this from my porch, too. This was one of my favorite parts. 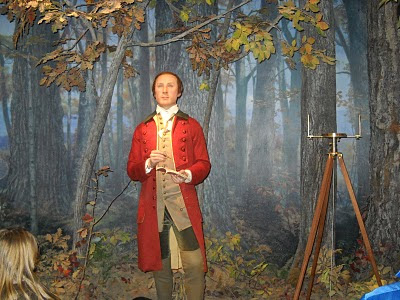 In the museum, they used the latest laser technology and based on his death mask, or something like that, they made this wax figure which is supposed to be as close a guess as they can make as to what he actually looked like. They had several of these at various stages throughout his life. This is as a young man when he was a surveyor, after he resigned from the British army. 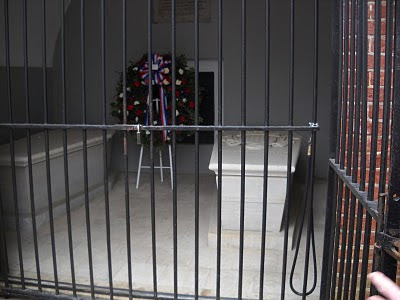 My next favorite part (as morbid as it may sound), was his tomb. He died in 1799 at the age of 67. Even though we passed by it fairly quickly (it's towards the end of the outdoor part and we were all VERY cold), there's a spirit . . . a reverence that's hard to express. His sarcophagus is on the right, and Martha's is on the left. Behind the wreath of flowers is a black door that leads to the tombs of 25 of his family members.
This is actually called the "New Vault" that was built after Washington's death. In his last will and testament, he gave specifications for it's location and design, and willed that he be moved to it upon its completion. In 1831 (or thereabout), the move from the "Old Vault" took place. London wanted to know why the old one wasn't good enough. I guessed it was so that more of his family could be buried together, but it's just a guess. 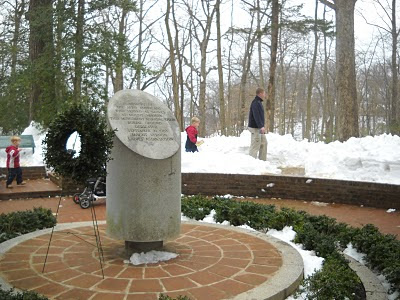 This is a marker for the burial site of slaves who died on Mount Vernon. London really struggled with the idea that George Washington had slaves. And we really struggled to give him an answer. But I found it fascinating that in his will, Washington specified that after Martha's death, all the slaves that had been in his possession should be freed. That wasn't good enough for Martha. By two years after his death, she had freed most (I think most, not all, but I'm not sure) of the slaves who worked at Mount Vernon. You gotta love Martha. 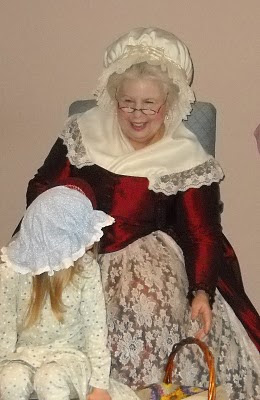 Okay, last picture for today. Since this is a living history sight, they have period actors and actresses. Martha was answering questions in the greenhouse theater. She was really great.The most interesting tid-bit I learned from her is when she pulled a little corset out of her sewing basket. She said she saw babies of 6-months in herring-bone corsets. Can you imagine!? Thankfully things have changed.

So after we'd been listening for a few minutes, London looked at me with an uneasy expression. Why is Martha Washington still alive? So I explained how she was just pretending to be Martha. He gave me another weird look. Why is she pretending to be someone else? He was seriously weirded out. I tried to explain the whole living history concept, but it was lost on my 6-year-old. Oh well. It was still fun.

So next time, I'll share more pictures of us and what we liked best. Sorry if this felt like a history lesson, but I found it all fascinating!
Posted by Janet Johnson at 9:10 AM

I wouldn't call this post torture for us. It's rather fascinating. I can't wait to hear what your favorite parts of the day were. :-)

I LOVED going to Mt. Vernon! I think my second favorite was going to Monticello. And don't forget to do Williamsburg - it's amazing! :)

Banned complain !! Complaining only causes life and mind become more severe. Enjoy the rhythm of the problems faced. No matter ga life, not a problem not learn, so enjoy it :)