License Plates! I can't get enough of them. And I know I just yammered on about them a few weeks ago, but I've stumbled across two more personalized plates that are just BEGGING to be discussed. Villainous License Plates. (Dun, dun, DUNNN!)

First up we have VILNMKR 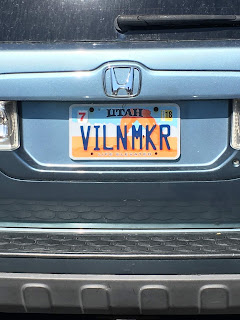 In case you aren't sure what that says, I read that as VILLAIN MAKER. Now, of course, I could be totally wrong. Maybe someone's last name is Viln. BUT, I'm sticking to my story that it is VILLAIN MAKER.

So what do you think? Parents who worry they'll mess their kids up? A writer who just loves writing villains? An illustrator who loves drawing villians? Or is it more diabolical than that? Maybe it's an evil scientist with a plot to take over the world. Maybe this is really the Joker's car!!! So many fun possibilities!

Next up goes perfectly with that first one: MMWHAHA 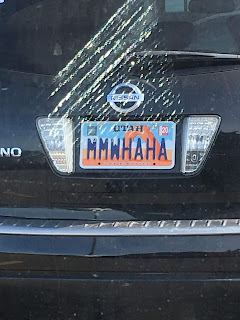 So awesome!! Maybe this is the second car of the person up above. Or maybe it belongs to someone who just likes to laugh evilly in the face of other's struggles. In fact, they like it so much, they paid extra to be able to laugh at all the strangers they pass on the road.

Come to think of it, I found this car parked at my son's school. Should I be worried? Maybe we have a stereotypical principal at his school living out the evil school principal trope. Or maybe he's just living it vicariously through his car since he's a very nice man. (So you have no need to worry, Mr. Principal! I do not suspect your secret identity as a villain AT ALL. Not even a little bit.)

Now I didn't get to see either of these cars actually driving. They were both parked. So I don't know if they drive appropriately for such license plates, but I sure hope I run into these cars again!

Now you tell me! What are the stories behind these license plates?

There is a car at my work that has a spelling variation Bwahaha. I once passed a car with Arizona plates that wad this tiny little blue carry that looked a LOT like the tire shop car on the movie Cars. It's plate said LUIGII. Lol

Silly I think that is violin maker!

And Bathwater, lol! You are absolutely right. That's probably what it really is. (But I confess, I like my version so much better!!) :)

I'm glad to hear, bathwater! It kind of says something that Violin Maker never even occurred to me. LOL!