Of all the polls I've done, this one surprised me the most. In truth, I thought this would be a 'no contest' event, but boy was I wrong. However, I found it fascinating to hear about all of your opinions on resolutions and goal-setting. Good stuff!

But lets get to the interesting stuff:

I really thought that while people might ignore resolutions or #fail at them (it just sounds cool to add the pound sign), most people would be pro-resolutions. So yes, I voted in favor of them.

However, I forgot to consider that most of my readers are writers. I should have realized that semantics would play into this. Unlike most people in the world, we writers make the distinction between goals and resolutions.

That said, I have a feeling that if I did Goals vs. Resolutions, Goals would win hands down. They seem to be preferred based on all your comments.

Okay. Now on to the next debate: 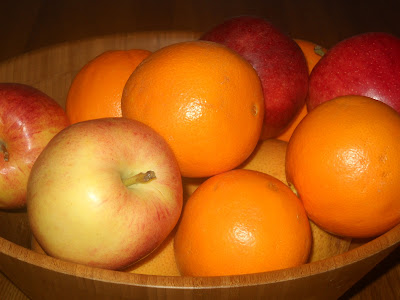 Posted by Janet Johnson at 6:35 AM

I have goals not resolutions. Most non writers wouldn't know the difference. What they don't know is that resolutions are made to be broken. Goals aren't. :D

Apples vs Oranges. That's a tough one. It's not as clear cut as that. I'm very particular on which orange or apple I prefer. I don't really like either fruit when it comes down to it. I love granny smith apples and that's it. And I love mandarin oranges (though sometimes I'll have one of the other kinds, depending on peelability). Yep, I'm very fussy. And let's not talk about how fussy I am with bananas. ;)

I think I voted no cos I'm lazy and am constantly breaking them (when I do make them! LOL!)

Awww I love both fruit!! Oh dear! If I must plump for one, I'd go for oranges!! Take care
x

Oh my goodness: APPLES. I don't think I've ever felt so passionately about anything in my life. I will shout it from the rooftops: APPLES! APPLES! Oranges are messy and sticky and take a long time to peel and have pits and seeds and squirt people in the eye... If apples don't win, I don't know what I'll do. I may have to avoid the announcement.

Oooo, tough one. I have to say apples, simply because you get more variey of taste within one fruit, depending on the type of apple. I like the Braeburns or a really fresh Macintosh. Plus, I've never been orange picking, but I've been apple-picking :)

Interesting poll.Most writers I know at least seem to have a goal for how much they'll write each day whether it's word count of a time limit. I'm very goal oriented, maybe too much so, so last year I didn't make any resolutions. I didn't accomplish as much, but i still got quite a bit done and didn't feel bad about what I didn't do. Of course, this year I made goals again, but tried not to over do it.

Yes, goals--the little steps you take to reach your DREAM! :D And, APPLES!!

So difficult! The apple crop wasn't very good this year, but we have a box of delicious navel oranges out in the garage, so this year I'll have to go with ORANGES. (Other years, when the apples are crisp and juicy, it would be apples. Sorry apples. I feel like a traitor, somehow.)

Isn't there some unwritten law that says you can't compare apples to oranges? Let's call it Janet's law.

I refuse to take sides in this senseless debate. (I mean the one on this blog, not the Republican primaries).

Though I consume both, I think we keep several of the OJ makers (like Florida Natural) in business as much of the stuff that we as a family drink.

Apples. So many varieties to choose from.

As for apples vs. oranges, I love both, but my gut says apples :)

I voted no resolutions, right? But then this year I did a "goal." What a weirdo.

Apples. Oranges are grand and all, but there are all different types of apples. :)

Good point about writers and their semantics!

Now apples vs oranges, that's impossible to pick. That one depends on my mood! However, I will say that chocolate covered oranges TASTE BETTER than chocolate covered apples, and that's all that really matters :) (Apples are meant to go with caramel, which is yummy, too. But chocolate always wins!)

I always associate resolutions with New Year's resolutions, which are just not something I do. I make lots of goals, but I make them all year round, so I just kind of ignore resolutions.

And I vote oranges!

I missed the goals/resolutions deal, which makes my job in this post easier.

Apples. You can eat them anywhere, any time and don't need a napkin.

Oranges! I have an orange tree so I'm a bit biased. And Congrats! on 400 followers.

Oh no! I like both apples and oranges, but we have a bag of Cuties in our fridge and they are soooo good. So this week, I'm going to have to say oranges. ;)

Oranges, in a heartbeat. It helps that I'm a (sort of, faded now) redhead.

In winter, oranges. In fall, apples. It's all about the season for me.