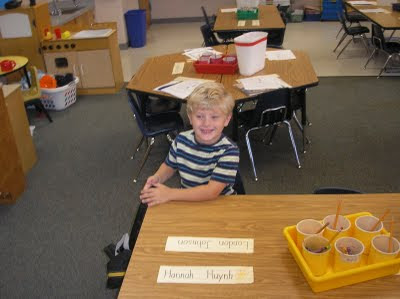 School started this past week. London did a month of summer Kindergarten in Missouri back in June, but now it's official. He has been going to school a full week. We walk together and say goodbye at the door. He gives me a hug and a kiss, repeats it for Brandt. (By day 3, I had to remind him). Then he strides in the door with a big smile. Confident. Excited. Guess I can't ask for much more.

He got new shoes, which he loves to tell people about. "Ta da! Look at my new yellow shoes!" (They're blue and silver with a little bit of yellow lining).

And he got a few shirts. His star wars shirt is his favorite, though. I gave him the lecture: "No light saber fights at school! Got it?" "Ye-e-s, Mom. I got it," he droned. Where'd that droopy kid voice come from? You'd think I lecture him all the time or something. And you all can just stop laughing! ;) 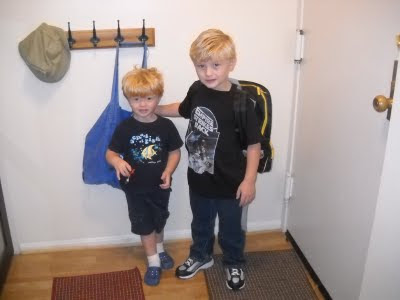 He brags that now he only has 2 days off a week, just like Daddy (which isn't actually true, since Daddy only gets one, but that's a different story).

When we head home at the end of the day, little girls call out to him, "London! Bye!" London barely notices because he's so busy giving me a run down of the day. Yesterday (Monday), he told me, "I had art today, and guess what Mom, we go to art every Monday. Isn't that exciting?!" (I heard his teacher repeat the word "exciting" several times at back-to-school night, so at least I know he's listening.)

After the first day, he told me he had a new friend and wanted me to call him so they could play. "What's his name?" I ask. "Umm, I don't remember. But you could call him." Ri-i-i-ight.

The next day he was more excited. "Remember that friend I was telling you about? His name is Solomon. Now can you call him?" "I need a phone number to call him, London, and I don't know it." London was very disappointed. "Why, mom? Why don't you know it?" So I told him it's because I'm not clairvoyant. That one took him awhile.

Oh, and it turns out Monday is short day. Woops. Fortunately we didn’t go to the library like Brandt wanted. 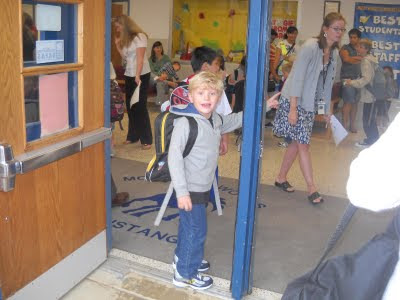 Though one might guess he's pointing at his teacher, he's actually asking me which way to go. It's the other way. :) 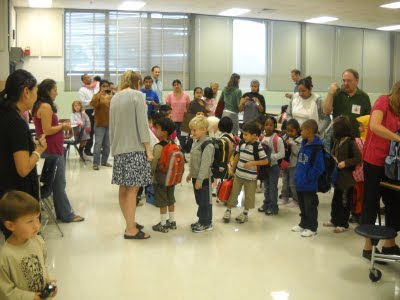 Ready to go! The Kindergarteners meet in the gym in the morning and walk to class as a group. Look at him stand at attention!